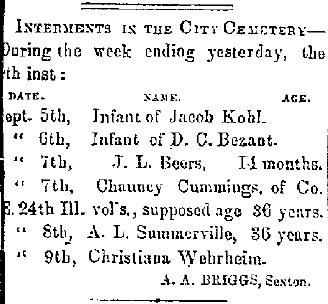 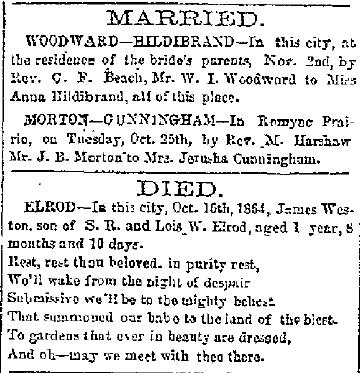 MARRIED
Woodward-Hildibrand - In this city, at the residence of the bride's parents, Nov. 2nd, by Rev. G. F. Beach, Mr. W. I. Woodward to Miss Anna Hildibrand, all of this place. 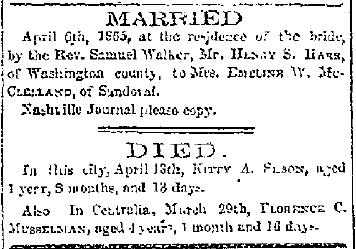 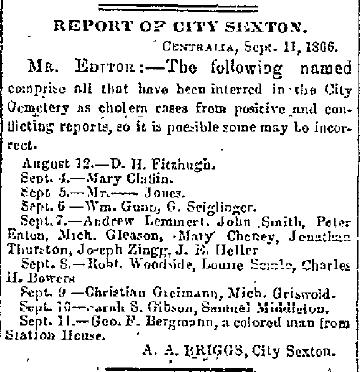 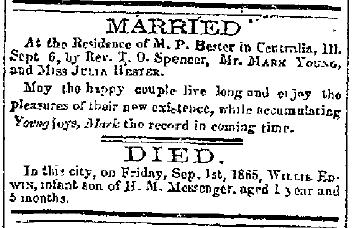 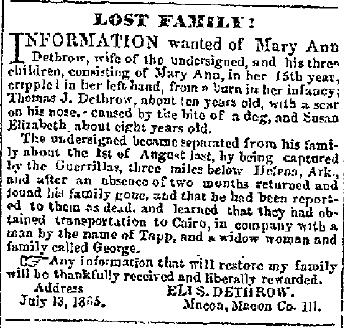 LOST FAMILY
Information wanted of Mary Ann Dethrow, wife of the undersigned, and his three children, consisting of Mary Ann, in her 15th year, crippled in her left hand, from a burn in her infancy; Thomas J. Dethrow, about ten years old, with a scar on his nose, caused by the bite of a dog, and Susan Elizabeth, about eight years old.

The undersigned became separated from his family about the 1st of August last, by being captured by the Guerrillas, three miles below Helena, Ark., and after an absence of two months returned and found his family gone, and that he had been reported to them as dead, and learned that they had obtained transportation to Cairo, in company with a man by the name of Tapp, and a widow woman and family called George.

Any information that will restore my family will be thankfully received and liberally rewarded.
ELI S. DETHROW, Macon, Macon Co., Ill. 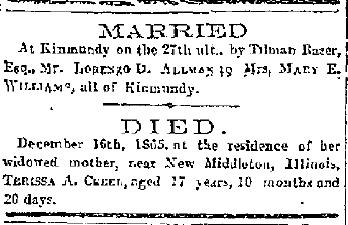 MARRIED
At Kinmumndy on the 27th ult., by Tilman Razer. Esq., Mr. Lorenzo D. Allman to Mrs. Mary E. Williams, all of Kinmundy. 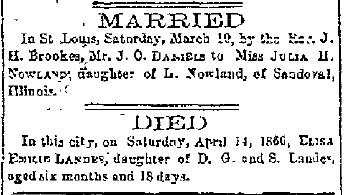 "A young man named Joseph STATES, residing in the north part of Centralia, Ill., who was married over nineteen days since, was shot dead in his yard by some unknown person. There is no clue to the murderer. The dreadful deed is supposed to have been committed by some of his previous rivals in the suit for the hand of his bride. Some suppose it to be a case of suicide, caused by the fact that he was destitute of funds. He was shot through the heart. His wife went out and found him just dying."

Joseph was my ggg grand uncle. He was the son of John Hazel States and Rosanna Gibson. The wife mentioned in the article was Nellie Ball. They were married in July 1880 just before he was murdered. I don't know what happened to Nellie after Joseph's death.

Nativity, age arid politics of the Grand Jury at the August term of the Circuit Court, 1880: 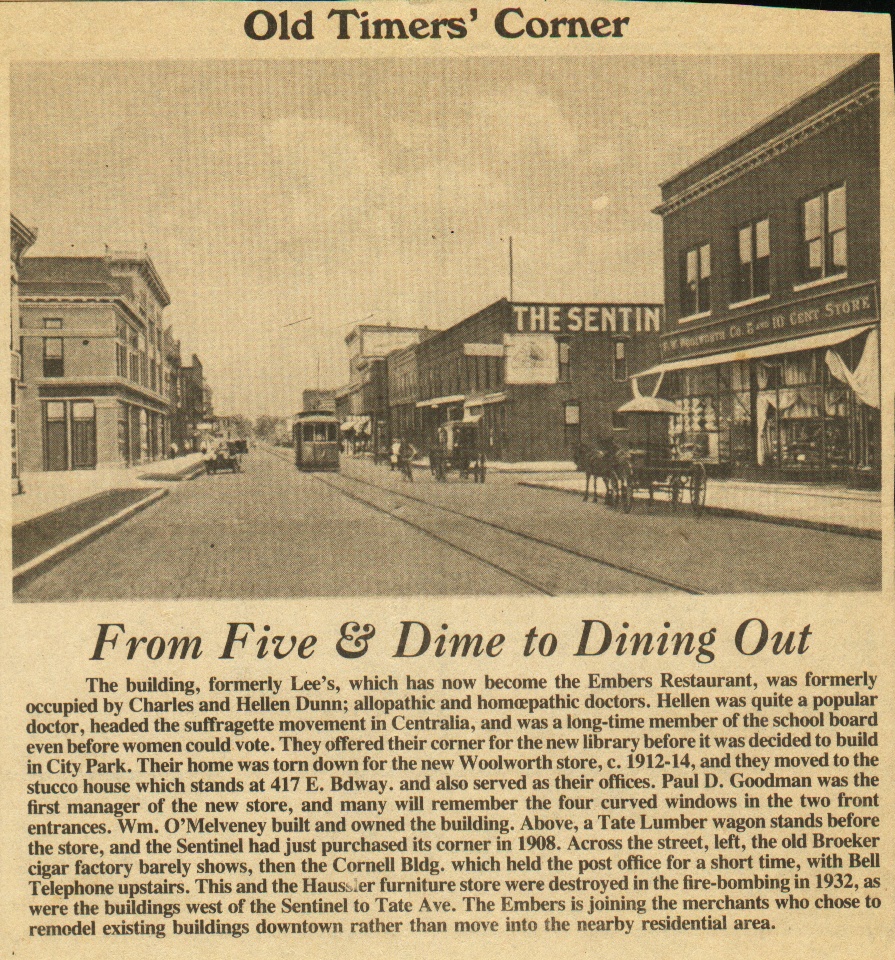 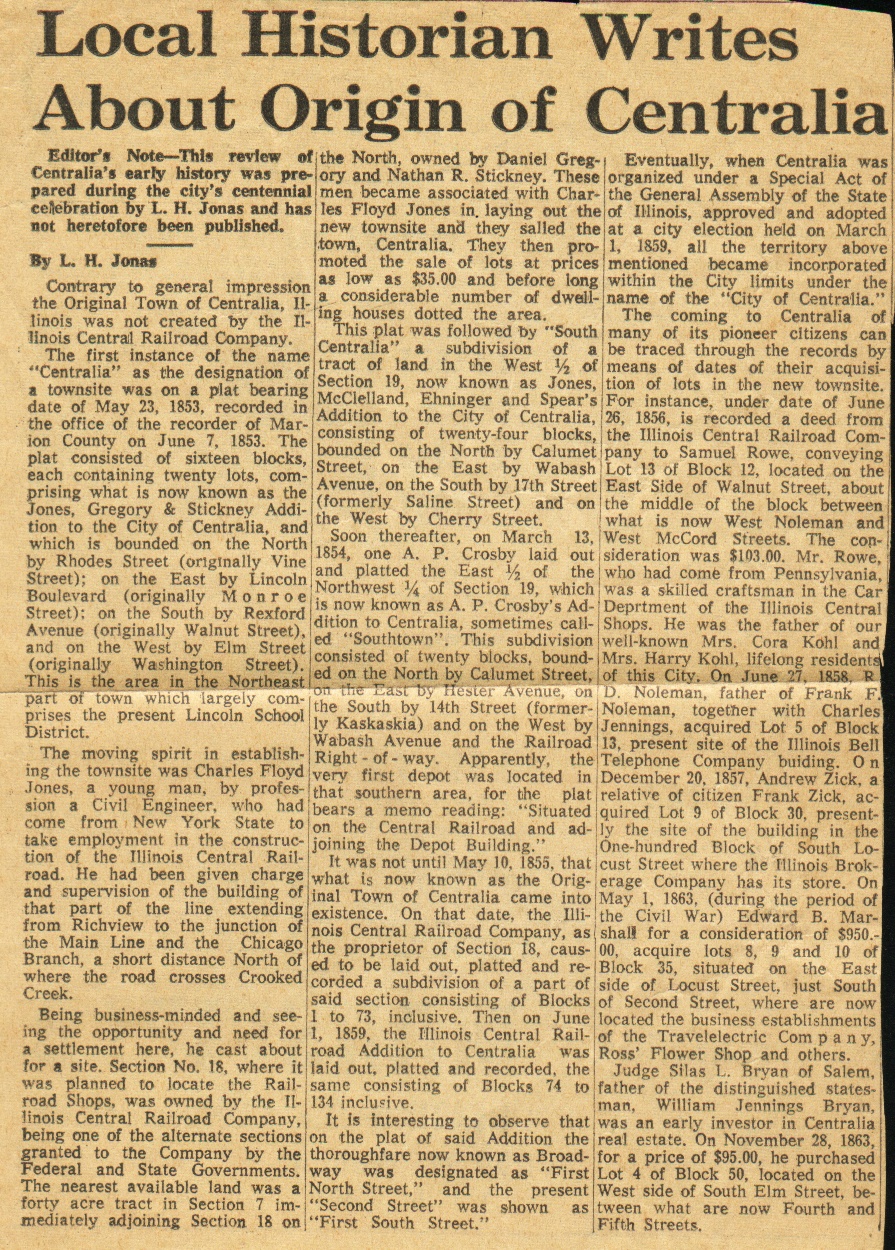