It is always pleasant and profitable to contemplate the career of a man who has made a success of life and won the honor and respect of his fellow citizens. Such is the record, briefly stated, of the well known and progressive gentleman whose name forms the caption of this article, than whom a more whole souled or popular man it would be difficult to find in the business circles within the limits of Marion county, where he has long maintained his home and whose interests he has ever had at heart, for in all the relations of life he has proven true to every trust reposed in him and few citizens of the county are worthier of the high esteem which they enjoy than Mr. Bostwick, who is known as one of the leading lumbermen of this part of the state.

The subject of this review is descended from a long line of sturdy ancestors, the earliest generations being easily traced to the settlement of the Bostwick family at Stratford, Connecticut, prior to 1650. John Bostwick, the subject's great-great-great-great-grandfather, was born at Stratford, Connecticut, May 4, 1667, and he became Deputy to the General Court of Connecticut, serving during twenty-one sessions, from September, 1725, to October, 1740, and he served in the army as lieutenant and major. The great-great-great-grandfather of the subject, Ebenezer Bostwick, was born in 1693, and he was captain of the First Company or train band, of Danbury, Connecticut, in October, 1743. Edmond Bostwick, the great-great-grandfather of our subject, was born September 15, 1732, and died February 2, 1826. The subject's great-grandfather, Ebenezer Bostwick, was born June 22, 1753, and died March 16, 1840. He had an excellent war record, like his ancestors, having been an orderly sergeant in the Revolutionary army and he was a pensioner until his death. This family remained in the state of Connecticut through many generations and the subject's grandfather, Andrew Bostwick, was born at New Milford, that state, November 3, 1778, but he migrated to the West and died at Berrien Springs, Michigan, October 21, 1838. The father of our subject was a merchant at Niles, Michigan, his store having been the first brick building in that town. At President Lincoln's call for volunteers he enlisted as a private in Company E, Twelfth Michigan Volunteer Infantry, and he was made a prisoner of war at the battle of Shiloh and served nine months in Andersonville and Libby prisons. After his release he received several promotions and finally was made captain of the company, serving as such in a very creditable manner until the close of the war. He died at Niles, Michigan, in the year 1876, when fifty-six years old, and was given a military and Masonic funeral, which was very largely attended.

Among the subject's ancestors on the maternal side of the family was Rev. Peter Pruden, one of the founders of the colony at Milford, Connecticut, and in 1639 the founder of the First Church of Christ. When the two hundred and fiftieth anniversary of Milford was celebrated, a memorial window was placed in the church in honor of his memory. There is also in the memorial bridge a stone in his memory, bearing the text of his first sermon, "The voice of one crying in the wilderness." Of him the noted Cotton Mather says, "His death was felt by the colony as the fall of a pillar which made the whole fabric to shake." Another distinguished ancestor of the subject's mother was Capt. Thomas Willets, the first Mayor of the city of New York.

Landon M. Bostwick, one of the foremost business men of Centralia, Illinois, was born December 1, 1862. He received his early education in the public schools and afterward was instructed in the higher branches by a private tutor, the course of study including some travel. The death of the subject's father made it necessary for him to give up study and seek means of self support, which he found in the locomotive department of the Michigan Central Railroad, becoming an engineer at the early age of nineteen years. While serving in the capacity of fireman and engineer, he took a course in mechanical mathematics and draughting, and otherwise fitted himself for work other than locomotive engineering. At the age of twenty-four he designed and built the machinery plant at the Michigan State prison at Jackson, Michigan, which, at this writing, twenty-two years after completion, is still in active service with practically no alteration or change.

After acting as manager of this plant for one year, Mr. Bostwick was offered, and accepted, a position as engineer on the Panama Canal, when it was owned by the French government, and was being constructed by the famous French engineer De Lesseps; but by a curious turn of fortune's wheel, Mr. Bostwick gave up the Panama Canal project, while enroute and also the mechanical line of business in which he had so successfully launched. At this time the South was just beginning to be called upon to take the place of the North in supplying lumber, and Mr. Bostwick grasped an opportunity to become a lumberman, making his initial beginning in the backwoods of Howell county, Missouri. The pay was poor and the work was hard, but opportunity had knocked at the door and the summons were willingly and gladly answered.

After working up through every department to the position of manager and finally stockholder in some of the best mills of the South, he has no regrets over the humble beginning in the backwoods of Missouri.

The Bostwick Lumber Company of Centeralia, Illinois, is a corporation of which our subject is president and the heaviest stockholder. He knows the lumber business thoroughly and always gives his customers a fair deal, consequently his trade, which has steadily grown, is now very extensive. 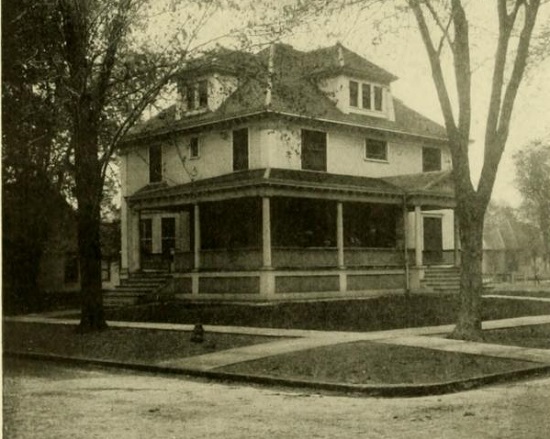 Landon M. Bostwick was happily married February 3, 1892, to Frances Pease, a native of Wilson, New York, the daughter of A. Douglas and Abigail Pease. One of her ancestors received a grant of land from King George, this family having been originally from England. The subject and wife are the parents of three children, namely: Willard D., born January 26, 1893, and who is at this writing attending the public schools; Dorothy was born November 17, 1900; the date of Allen L.'s birth is October 18, 1903. They are interesting children and add much sunshine to the modern and pleasant home of the Bostwicks.

In his fraternal relations Mr. Bostwick is a member of the Masonic lodge at Centralia, No. 201, Ancient Free and Accepted Masons, Centralia Chapter No. 93; also Centralia Council No. 28, and Cyrene Cornmandery No. 23; he also belongs to the Benevolent and Protective Order of Elks, No. 493, and the United Commercial Travelers; the Modern Woodmen and the Hoo-Hoo, the latter an organization of lumbermen, purely social, now consisting of nearly thirty thousand members. The mystic number of this association is nine, every member having a number, and is fortunate if there is a nine in it. President Roosevelt's number is 9999. The Bostwick family for many generations have been members of the Episcopal church. Mr. Bostwick is now and for many years has been senior warden of St. John's Episcopal church at Centralia.

Our subject is a member of the Episcopal church as is also his estimable wife. In politics Mr. Bostwick is a Republican, and while he has not been prominent in the affairs of his party, he has ever assisted in whatever way he could the furthering of good city government and the welfare of his community. He is now president of the Board of Education.

Whatever of success has attended our subject's efforts has been entirely owing to his own endeavors, his energy, industry and natural ability. From small beginnings he has gradually attained a prominence in his county which entitles him to be regarded as one of its leading citizens.