No business man of Centralia is regarded with higher favor than is the subject of this sketch, who, while looking to his own interests does not neglect to discharge his duties in fostering the up building of the community in general. Robert O. Brigham, manager of the Centralia Envelope Company, was born in Clinton, New York, May 23, 1861, the son of Lewis and Sophia (Johnson) Brigham, the former having been born in Vernon Center, New York, December 4, 1820. His parents were of English extraction on both sides of the house. Lewis E. Brigham was a contractor and carpenter, and was educated in the public schools of his native state. The subject's parents reared a family consisting of eight sons and one daughter, Robert O., our subject, being the seventh in order of birth. The subject's father died in Clinton, New York, February 22, 1907, at the age of eighty-seven years. His wife was born in that city April 29, 1825. She was educated in the common schools in her native community. The parents of the subject were married in 1843 in the state of New York. The mother of our subject, an elderly woman of beautiful Christian character, is still living in Clinton, New York.

Robert O. Brigham received his early education in Clinton, New York, in the public schools. He quit school when fifteen years of age and went to Boston to learn the machinist's trade. Here he took advantage of the Boston night schools and applied himself with his accustomed vigor to technical drafting and the necessary commercial branches. He served his apprenticeship with the National Sewing Machine Company, for which he worked for ten years, at the end of which time he was called to take charge of the Whitmore Sewing Machine Company, in the employ of which he continued for one year; the then went to Los Angeles, California, then to Denver, Colorado, and worked for W. E. Scott, machinery company, having charge of the model and repair work, after which he worked for the J. C. Teller Envelope Opener Company, of Denver, Colorado.

Robert O. Brigham invented an attachment to an envelope machine for placing a string in the envelope and then formed a company to put such an envelope on the market. The manufacture was continued with much success until 1896, when he and two other men bought the interest of the former manager, forming the Western Envelope and Box Company. They continued for one year in Denver, but finding that they were too far west for the successful working of such a plant, they moved to Omaha, Nebraska, remaining there one year, after which they moved to Centralia, Illinois.

After operating the plant for eight years in Centralia, it was reorganized and called the Illinois Envelope Company, and moved to Kalamazoo, Michigan. After one year's residence in Kalamazoo, Mr. Brigham resigned his position with the Illinois Envelope Company and returned to Centralia and helped to organize a new envelope company with only Centralia capital. This company is known as the Centralia Envelope Company, and is capitalized for one hundred thousand dollars, fully paid in. This company is now only two years old and is doing a thriving business. Its capacity at the beginning was one and one quarter million envelopes every ten hours, and has been increased to one and one half million per day. The order for the machinery for the plant was the largest ever given at one time for a like enterprise. 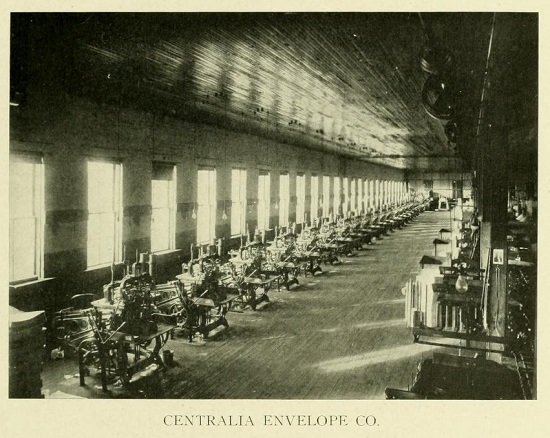 The view accompanying this article is of thirty of the latest improved envelope machines in the plant of the Centralia Envelope Company mill. These machines are marvels of ingenuity. The paper is cut to the proper size and shape, then taken to these machines in which they are gummed, folded, dried and counted at the rate of one hundred to one hundred and thirty per minute, according to size. The picture shows only the envelope machines. There is also a large printing department equipped with latest improved printing machinery and all the necessary equipment that goes to make a complete printing establishment, cutting department, box department, case department, hand fold department, machine shop, in fact, everything that goes to make up a complete envelope mill.

The capacity of the mill, as already stated, is one and one half million envelopes every ten hours, making it one of the largest in the United States, and one of the leading industries of Southern Illinois. Its goods are known far and wide for their high quality.

Our subject is particularly well fitted to be manager of such a gigantic and successful enterprise. His native constructive ability for technical mechanics and intricate machinery has eminently fitted him in this special line. His economic foresight of proper management, good machines, good workmen, good material all contribute to the success of the company.

All the machinery in the plant is modern, up-to-date in every respect, and high-grade work is turned out rapidly. Our subject has had a wide experience in the management of such concerns. He is the originator and inventor of many of the improvements to be found in the present highly developed envelope machine. This company under his superior management now operates thirty envelope machines, ten printing presses and ten box machines. The factory also has a complete machine shop and repair department, also a complete case department. The buildings are two stories high, built of brick and frame. The main building is two hundred feet long and fifty feet wide. The shipping and stock room is one hundred and thirty-five by eighty-five feet. A switch from the main track of the Illinois Central Railroad runs to the door of the big shipping room, all under cover of spacious sheds. The Illinois Southern tracks also run into the sheds of the shipping department. The machines of the plant are run and the buildings are lighted and heated by a one hundred and sixty horsepower steam plant and a sixty horsepower engine. A four hundred light dynamo furnishes the lighting of the great plant. Eighty girls and twenty-five men and boys are constantly employed to operate the plant, the daily capacity of which is one million and five hundred thousand envelopes.

This new but successful enterprising company was started by thirty-five of the business men of Centralia, and it is owned by Centralia people, being capitalized at one hundred thousand dollars, which was raised in a very short time. The capacity of each machine runs from sixty-five to seventy-five thousand each ten hours. It is an interesting plant in every detail and one of the rapidly growing large industrial concerns of Southern Illinois.

Robert O. Brigham was married to Minnie G. McDonald, the accomplished daughter of James and Rebecca (Nicholson) McDonald, a well-known family of Quincy, Illinois, to which family there were four children, Minnie being the youngest. To our subject and wife one daughter was born, who passed away when eighteen years old.

Our subject is a member of Centralia lodges, Knights of Pythias and the Benevolent and Protective Order of Elks. He served as a member of the school board for one term. In politics he is a Republican, and he was reared a Baptist, but he at present worships with the Christian Scientists, and is president of the Church Board of Centralia. His beautiful home just west of the Public Library is nicely furnished, being also well filled with choicest books of an excellent variety, also a large number of beautiful oil paintings by his sister and daughter. He is a genial gentleman of good habits and modest demeanor.