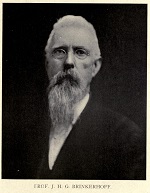 The biographer in writing of the representative citizens of Marion county, Illinois, has found no subject worthier of representation in a work of the province of the one at hand than Professor Brinkerhoff, author of the historical portion of this history, who is known as a man of high attainments, and practical ability, as one who has achieved success in his profession principally because he has worked for it. His prestige in the educational circles of this locality stands in evidence of his ability and likewise stands as a voucher for intrinsic worth of character. He has used his intellect to the best purpose, has directed his energies in legitimate channels, and his career has been based upon the wise assumption that nothing save industry, perseverance, sturdy integrity and fidelity to duty will lead to success. The profession of teaching which our subject has made his principal life work offers no opportunities to the slothful, only to such determined spirits as that of Mr. Brinkerhoff. It is an arduous, exacting, discouraging profession to one who is unwilling to subordinate other interests to its demands, but to the true and earnest devotee it offers a sphere of action whose attractions are equal to any and whose rewards are unstinted. That the subject possesses the qualities enumerated is undoubted owing to the success he has achieved and the high regard in which he is held by all who know him.

Prof. J. H. G. Brinkerhoff was born December 14, 1844, in Hackensack, New Jersey, and he came to Illinois with his father in 1852, who settled in Grandview, Edgar county, where the subject's father established a plow and wagon shop, which he conducted for four years. In 1856 his father moved on a farm where young Brinkerhoff was inured to the hard work of the farm on that day. He was educated in the common schools of those early days when opportunities for higher learning were limited. Being desirous of making the most of his life work, he later attended Steele's Academy and the Kansas high school, also the Indiana State Normal School. He decided to take up the profession of law and subsequently entered McKendree College and received the degree of Bachelor of Law from that institution, but believing that teaching was best suited to his tastes he accordingly began that line of work in 1864 and he followed that profession with unabated success for a period of thirty years, becoming known as one of the ablest educators of this section of the state. During that long stretch of continuous service he never lost a day on account of sickness. For ten years he was 'at the head of the city schools in Lebanon, Illinois, and for the same length of time held the same position in Salem. Owing to his high educational attainments, his close application to duty and his native ability in this line of work, he was a favorite with both pupils and their parents and his services were always in great demand.

Professor Brinkerhoff was united in marriage with Amanda S. Clark at Mascoutah, St. Clair county, Illinois, in 1873. She is a representative of a well known and influential family of that county. To this union seven children have been born, four sons and three daughters, one daughter dying in infancy. The other six are all living in Salem.

In 1878 our subject united with the Christian church and he has for many years preached the Gospel of Christ, as occasion permitted.

Professor Brinkerhoff is a descendant of sterling old Knickerbocker Dutch stock, the founder of the family having settled in Long Island in 1632, and in 1685 he removed to a farm on the Hackensack river in New Jersey, which farm remained in possession of the family until after the Revolutionary war. The paternal great-grandfather of the subject was a lieutenant in the New Jersey Continentals and he was in active service during the war except for a period of eighteen months when he was a prisoner of war on the Jersey prison ship in the East river, from which -he finally escaped by jumping overboard and swimming to the New York side of the river. The family have always been patriotic, law-abiding and firm believers in the right of man to govern himself.

Extracted 27 May 2019 by Norma Hass from 1909 Biographical and Reminiscent History of Richland, Clay and Marion Counties, Illinois, pages 524-525.