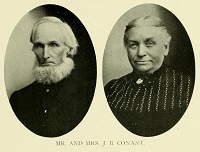 This venerable pioneer and representative agriculturist of Kinmundy township, Marion county, Illinois, has lived on the farm which is now his home practically all his life, and thus he has witnessed and taken part in the development of this section of the state from a sylvan wild to its present status as an opulent agricultural and industrial community. He early began to contribute to the work of clearing and improving the land of its primitive forests, later assisted in establishing schools and better public improvements and facilities, while his course has been so directed as to retain for him the unqualified approval and esteem of the community in which he has so long made his home, until today he is regarded as one of the most substantial and influential citizens of the township, deserving of the greatest credit from the fact that he began life unaided and without the tender guidance of parents, being compelled to go it alone from early childhood, but such stern discipline, somewhat unpleasant and regrettable, was not without its value, for it fostered in the lad an independent spirit and gave him that fortitude and courage that has made for subsequent success.

John B. Conant is a native of this county, having been born here February 17, 1839, the son of Airs Conant, who came to Massachusetts from England, there being three brothers of the Conant family on the ship, one of whom settled in Baltimore, another in the North and one, Airs Conant, went to Georgia and joined the United States army for the purpose of taking part in the War of 1812, having fought faithfully throughout the struggle, being wounded in the hand. After the war he returned to Georgia, where he settled, and married Polly Pepper, to which union eleven children were born, John B. Conant being the youngest son. Airs Conant and wife moved to Marion county, Illinois in an early day while the country was still a wilderness. He partly improved seven different farms, selling each and moved to Missouri, preempting all the land he had from the government. All the members of this pioneer family have passed away with the exception of our subject.

The father of our subject also taught school in Marion county, having been hired to teach a subscription school four miles from home, the first term lasting three months, the second term being of the same duration; however, he taught only one month on the second term, when he stopped to put out a crop of corn. He worked too hard and drank too much water while overheated, which caused his death in less than a week, leaving a large family to struggle with the wilderness and the clearing of a new country. The mother of our subject also passed away one week after her husband's death, leaving John B., then eight years old, to live with his older brother, William, with whom he remained until he was fourteen years old, at which time he chose his own guardian, Mark Cole, who cared for our subject in a manly and fatherly manner and procured a land warrant for him, but the land was afterward sold for the lack of payment of one hundred dollars.

Our subject's early education was limited to the district schools, his first school having been taught by his father, but he is well educated and he has always been a most successful farmer, beginning life with nothing, as before stated, he wisely applied his energy and managed his affairs with that foresight and discrimination that always brings success, and his farm properly consists of seven hundred acres of as fine land as is to be found in this locality. However, it has been divided up and apportioned among his children, there now being (1908) one hundred and ninety-three acres in the home place, which are kept in a high state of cultivation and well improved, showing that a man of thrift and excellent executive ability has had the management of it. He lives in a modern, substantial and very comfortable dwelling, surrounded by convenient outbuildings, and everything denotes prosperity about the place.

Our subject was united in marriage to Mary Atkins on April 11, 1861, the daughter of Mr. and Mrs. John Atkins, natives of Georgia and Tennessee, respectively, and to this union the following children have been born, named in order of birth: Fannie, who married Isem Lansford and had four children, one of whom is living; Ayers married Maggie Door and has four children, all living; Polly married Noble Neeper and is the mother of eight children, all living; Margarette married Guy Neeper and has one living child; Eli married Vinda Owens and has six living children; Ida married Mel Gray and has three living children, one having died; Martha married Francis Reese and has one child; May, Emmet, Hulda and Ruhe are all deceased; Ira is married to Hattie Hoovey and has one child.

Politically Mr. Conant is a Democrat and he has been School Director in his township, also Road Overseer. In religious matters he subscribes to the Cumberland Presbyterian faith, although he was reared a Methodist, to which creed his father adhered.

Our subject is at this writing sixty-nine years old and is well preserved, being in fairly good health. As the architect of his own fortunes he has builded wisely and well and the success that crowns his efforts is well merited. He is broad-minded, liberal, progressive, public spirited and is well known and highly respected in the community which has been his home for so many years and where he has done so much faithful work, which has resulted in good not only to himself and family, but also to his neighbors and the community at large.