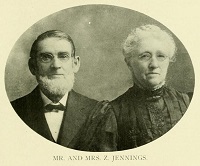 The life history of the subject of this sketch goes back to the pioneer days, since which Mr. Jennings has been a very potent factor in the affairs of Marion county, in which he is regarded as a foremost citizen in every respect, therefore, for many reasons, it is deemed entirely consistent to give him conspicuous mention in this volume.

Z. C. Jennings was born February 14, 1838, in Marion county, Illinois. Israel Jennings, the subject's grandfather, was a native of Maryland and when he reached young manhood went to the state of Kentucky and while at Marysville married Mary Waters in 1808. In 1818 he came to Marion county, Illinois, and settled six miles southeast of Centralia, being among the very first settlers there, having Indians as his neighbors, and the dense woods abounded in an abundance of wild game. He was one of the squatters at Walnut Hill until 1827. This section was then a part of Jefferson county. It was here that Mr. Jennings entered land, which he developed and where he died in 1860. His first wife passed away in 1844 and he married a second time, his last wife being Lear Sterling, of Centralia, this county. There were no children by his second wife. The following are the names of the children by his first wife: Israel, Jr., who married a Miss Davidson, was the father of eleven children; Charles W., the subject's father; William W. left home in 1847 and went to Wisconsin. He was in the mining, mercantile and grain business, in which he made a fortune. In 1853 he went to California and engaged in gold mining, but on account of failing health and trouble with his eyes, came back to Marion county where he remained for several years, at one time engaging in railroad contracting in northern Missouri. In 1861 he enlisted in the Union army and served during the war, after which he settled in Marion county and in 1875 he went to Austin county, Texas, where he lived until 1890, when he came to Alvin, Illinois, and built a modern home, having become prosperous. He first married Margaret Noleman. The date of his death was 1904. He was highly respected by all. Ann, the third child of the subject's grandfather, married Rufus McElwain, a farmer in Centralia township, who later lived at Salem, this county. Mary, the fourth child, who was known as "Aunt Polly," married a Mr. White. They lived near Walnut Hill where he conducted a tanyard. John, the fifth child, died when he reached maturity. The sixth child died when young. In Marion county, in the early days, no citizen was more prominent than Israel Jennings, who was one of the largest land owners of the county. He was a faithful member of the Methodist church, and a good Democrat. In 1827 he was elected a member of the Legislature when Vandalia was the capital of the state. He was a member of the house contemporaneous with Peter Cartwright. He was postmaster at Walnut Hill, Illinois, for many years, beginning in 1834. He was a slaveholder and owned the only male slave ever held in this county. He came here before there were any steam railroads, but during his life he noted wonderful changes, being instrumental in bringing about much of the progress of the county. He opened a store and gave dry goods and groceries in exchange for produce, which he hauled, to St. Louis by wagon, bringing back supplies. At the time of his coming to this county he had two daughters who had reached maturity. They were taken sick while he was away in Shawneetown on one of his usual trips and one of them died. There was no lumber in the community, so a white oak tree was cut and a coffin hewn from it, in which to bury the young lady, whose grave is on the old place he owned. He was known to be a very eccentric man, and ten years before his death he bought a metallic coffin, which he kept in the house until his death, and he was buried in it, dying April 20, 1872. His wife died April 3, 1885.

Charles W. Jennings, the subject's father, was born in Kentucky, and he came to Marion county, Illinois, with his parents, settling one half mile from his father, where he made a home, and became owner of nine hundred acres of land. He married Mariah Davidson, a native of Kentucky, and the following children were born to them: Sarah, deceased, married Capt. R. D. Noleman, who is also deceased; Josephus W., deceased, was born October 29, 1827, lived on the old place and was educated in the district schools. He was a merchant at Walnut Hill, Illinois, until 1856, when he moved to a farm one half mile west of that place, where he died November 20, 1890. He married Amanda Couch, who was born January 8, 1834, the daughter of Milton and Mary (Beard) Couch. They were the parents of the following children: Edgar, Frank, Mary, Lizzie and Nancy. Harriett, the third child, married B. F. Marshall, who lived at Salem, Illinois. They are both deceased. Maria E. married Silas Bryan, who was county Judge, and lived at Salem, Illinois; Z. C., the subject of this biographical sketch, was the fifth in order of birth. Nancy married James Davenport, who is deceased. She is living at Salem, this county. America married William C. Stites. Both are now deceased. Docia married Alram Van Antwerp, who is deceased. She is living in St. Louis, Missouri.

The subject's father was a man of excellent business ability and a good manager, he having become wealthy. He was a member of the Methodist Episcopal church and in politics was a Democrat.

Z. C. Jennings, the subject of this sketch, grew to manhood on the old home place and was educated in the home schools and the high schools at Salem and Centralia. When twenty-two years old he married Mary J. Baldridge, daughter of James C. Baldridge, of North Carolina, and Margaret (Rainey) Baldridge, a native of Kentucky. At the age of nine years, James C. Baldridge came to Marion county with his parents. Dornton and Mary (Boggs) Baldridge, who settled near Walnut Hill, Illinois. James Baldridge and wife died in Jefferson county, Illinois. He married a second time, his last wife being Tabitha, the widow of Isaac Casey.

The subject started on the place where he now lives to make a home. He first owned forty acres of land, but being progressive he added to it from time to time until he now owns a fine farm of four hundred and twelve acres, which is in a high state of cultivation and one of the best stock farms in the county. He has raised some high-grade horses and cattle and has made all the improvements on the place himself, being regarded as one of the foremost agriculturists of the county, holding high rank among the stockmen of this locality.

Six children have been born to the subject and wife, as follows: Dr. Dwight was born September 1, 1860, and he graduated at the St. Louis Medical College in 1890, having previously attended the Carbondale Normal School, and he read medicine with Dr. Richardson, of Centralia, Illinois. He took up his practice at 4101 Washington avenue, St. Louis, where he has since been residing and has built up a large practice. He married Cora Locy, of Carlyle, Illinois, and three children were born to this union, Beatrice, Dorothy and Dwight L. Charles Emmett, the subject's second child, was born January 4, 1862. He is a farmer at Mosco, Washington, also a dealer in stock and grain. He married Angeline S. Creed, of Centralia township, and they have one son, Fred Allen. Maggie D., the subject's third child, was born December 17, 1863, and married Lewis E. Thomas, of Centralia, Illinois. He is a carpenter in the employ of the Illinois Central Railroad. Their only son, Charles, is deceased. Samuel R., who was born December 24, 1865, has always been a farmer and lived at home. Maria, who was born January 22, 1871, died in August the same year; Harriett G., who was born October 7, 1873, married E. M. Jones, of St. Louis. He is traveling freight agent for the Southern Railroad. They have three children, namely: Leona, Dwight and Grace.

The subject of this sketch lived at home until 1859, and was in the lumber business with his father for awhile, then he located on his present place. During the past few years he has devoted a great deal of his attention to raising fruit. For two years he successfully manufactured crates and berry boxes at Walnut Hill, Illinois.

Mr. Jennings has always taken a great deal of interest in politics. He ably filled the office of Supervisor for four years and other minor offices in the Democratic party, a member of the Methodist Episcopal church and a well read man on all leading topics. He has a substantial, beautiful and well-furnished home, presided over by a most estimable helpmeet, his wife being a woman of culture and refinement. Our subject is an uncle of Hon. William Jennings Bryan. He is well and favorably known throughout the county, being regarded by all classes as a man of force of character, stability, industry and honesty.