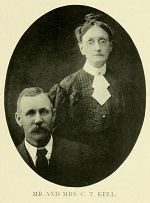 This enterprising farmer and representative citizen is a native of Marion county, Illinois, and belongs to one of the old and highly esteemed pioneer families of Haines township, where his parents, Thomas and Mary (Luke) Kell, settled in an early day and bore an active and influential part in the development and growth of the community (see sketch of William Kell). Charles T. was born a short distance west of the village of Kell, September 18, 1854, from which date to the present time his life has been very closely identified with Haines township, and as stated above, he now holds worthy prestige among the leading agriculturists and public spirited men of the section of country honored by his citizenship.

Reared in close touch with nature in the healthful outdoor life of the farm, he early acquired a vigorous physique and an independence of mind characteristic of the sturdy son of the soil, and while still quite young he became familiar with the varied duties of agriculture and learned to appreciate the honor and dignity which belong to those who earn their bread by the sweat of the brow. At the proper age he entered the schools of the neighborhood, which he attended at intervals until acquiring a practical knowledge of the subjects taught, the meanwhile assisting his father on the family homestead and contributing his full share to its cultivation.

After remaining with his parents until attaining his majority, Charles T. entered into partnership with his brother, John M. Kell, by purchasing a half interest in a saw and grist mill at Foxville, and during the ensuing ten years devoted his attention to the manufacture of flour and lumber, meeting with encouraging success in the enterprise and becoming widely known as a wide-awake and thoroughly honorable and reliable business man. Disposing of his interest in the mill at the expiration of the period indicated, he located on his present home farm in Haines township, adjoining the town of Kell on the south, having previously become the possessor of another tract consisting of one hundred and twenty acres in another part of the same township, both of which places he has brought to a high state of cultivation and otherwise improved. At the time the railroad was constructed he sold twenty acres, which is now a part of the village of Kell.

As a farmer, Mr. Kell easily ranks with the most enterprising and successful men of his calling in Marion county, being progressive in his methods and using the latest modern implements and machinery and by judicious rotation of crops he seldom fails to realize abundant returns from the time and labor devoted to his fields. He also pays considerable attention to the raising of live stock, which he finds quite profitable, and his domestic animals, including horses, mules, cattle, sheep and hogs, are among the finest breeds obtainable, and from their sale no small share of his liberal income is derived.

Mr. Kell has not been sparing of his means in the matter of improvement, and the beautifying and rendering attractive his home, the large two-story house with its many modern conveniences, being among the most desirable country residences in the township, while his commodious barn, outbuildings, wells, fences and other evidences of prosperity compare favorably with the best in his part of the country. He keeps in close touch with the advancement in agricultural science, and fully abreast of the times in reducing the same to practical tests, being progressive in all the term implies, and believes in the latest and most approved methods of modern farming.

In his political faith Mr. Kell is a Republican, and while interested in the success of his party, he has never been a politician, much less an office seeker or aspirant for leadership. In religion he subscribes to the Missionary Baptist creed, and for a number of years his name has adorned the records of that church, having held the office of deacon five years in the local congregation, to which himself and entire family belong, besides being otherwise interested in religious and benevolent work. He is superintendent of the Sunday school which he attends, has long been an influential leader in this department of religious endeavor, and with his wife has been instrumental in arousing an interest among the young people of the neighborhood and leading not a few of them to the higher life.

Mr. Kell was married in the year 1881 to Rebecca C. Purdue, of Haines township, daughter of Richard and Caroline (Harmon) Purdue, early settlers of Marion county and among the highly respected people of their locality (see history of the Purdue family). Mr. and Mrs. Kell have four children, the oldest of whom, a daughter by the name of Iva May, is the wife of R. A. Jeffries, of Haines township, and the mother of one child, Trevor Jeffries. The other children, two daughters and one son, are still under the parental roof, their names in order of birth being as follows: Myrtle, Ellis and Ethel. Mr. Kell has taken great interest in the rearing and educating of his children and they in turn have responded to his every effort in their behalf. The children all received liberal educational advantages in the public schools and also at Ewing Baptist College at Ewing, Ill. Ethel graduated at the age of seventeen from that institution in instrumental music. The family is one of the best known and most highly esteemed in the county and the name which is an old and honorable one has long been synonymous for noble manhood and womanhood and a high order of citizenship.