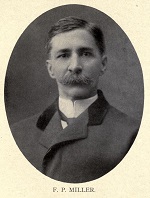 No resident in Centralia township, Marion county, is deserving of specific mention in a book of this nature more than the subject of this sketch, owing to the fact that he has led a very industrious and honorable life, and is widely known as one of the leading fruit dealers in the Middle West.

Franklin Pierce Miller was born in Caledonia, Pulaski county, Illinois, October 23, 1852, the son of Henry and Catherine (Coover) Miller, the former a native of North Carolina and the latter of Maryland. Henry Miller, who grew up in North Carolina, was a farmer and he also engaged in real estate speculation. He located in Jonesboro, Union county, Illinois, in the early settlement of the county, and was one of the pioneers of that locality. His father was a pioneer merchant there and also run a tannery. He was accustomed to take leather to St. Louis and trade for merchandise. The subject's grandfather Miller raised a large family and died in Union county, this state. The father of the subject had only a limited education, but he later devoted much time to home-study and became a well read man. He was a Democrat and took much interest in political affairs, a member of the German Reformed church, in which he took a great interest, while his wife was a member of the Lutheran church. The subject's mother had the first cook stove brought into Jonesboro and also owned one of the first sewing machines, which she operated for many years. Henry Miller passed away in 1872, at the age of fifty-seven years, and his wife survived until 1898. The following children were born to them: George, now deceased, having died at the age of fifty-seven years, married first a Miss Castleman, and his second wife was Addie Phillips. He died near Anna, Illinois. He was a teacher in early life, and later a commission merchant in Chicago. Andrew J., the second child, is deceased; he was a merchant at Cobden, Illinois, and married Allie Phillips; Alice, the third child, married Arthur Moss, who is deceased; she is living at Anna, Illinois; John, the fourth child, who was a merchant at Anna, Illinois, and who married Mollie Green, is deceased. Franklin Pierce, our subject, was the fifth child in order of birth. Mary married James N. Dickison, a merchant and a director of the First National Bank at Anna, Illinois. David Watson is a grain and lumber dealer at Winnebago, Minnesota; Caleb Monroe lives at Anna, Illinois; he is a farmer and fruit grower in Southern Illinois. He owns about four hundred acres of fruit, all kinds of vegetables, devoting especial attention to asparagus growing. He owns the opera house block and other valuable real estate and is interested in the bank at Anna.

The subject of this sketch was educated in the home schools and remained a member of the family circle until he was nineteen years old, when he clerked in his brother's store at Cobden, Illinois, where he remained for one year and then went to Chicago, where he was engaged with his brother, George, in the commission business on South Water street for about eight years. He closed up that business and came to Centralia in 1889, and bought his present home. He first put out twenty acres of strawberries the first year and the next year ten acres more and later planted many apple and peach trees. He raises mostly small fruits, apples and Elberta peaches. He has been a fruit grower and dealer at Centralia on an extensive scale for the past twenty years, the firm name being F. P. Miller & Company, fruit dealers and brokers. They buy fruit from Texas, Missouri, Tennessee, Georgia and all of the southern states and their trade extends as far north as this county. They are the largest dealers in Illinois and are known throughout the country. Their offices are in the Merchants' State Bank building in Centralia. J. E. Hefter, of Centralia, is a partner in the firm. They are known as "The Fruit Kings." Their business is a credit to this county and is of much importance in establishing in other states the prestige of the locality in commercial and horticultural lines.

The subject of this sketch built his modern and nicely furnished home in 1900 and his substantial and attractive barn in 1908.

Mr. Miller's happy domestic life began in July 8, 1885, when he was united in marriage with Laura Hoag, a native of Centralia, Illinois, the daughter of Peter and Carolina Hoag, natives of New York. They are both deceased. He was foreman of the blacksmith shop of the Illinois Central Railroad for forty years. Two bright children have added sunshine to the pleasant home of Mr. and Mrs. Miller, namely: Myrtle L., the wife of Robert Goodale, of Centralia, Illinois, where he is a wholesale manufacturer of ice cream. The second child of the subject is named Dwight Paul, who is at this writing attending Blees Military Academy at Macon, Missouri. He is a graduate of the Centralia high school.

In his fraternal relations the subject is a member of the Independent Order of Odd Fellows, Queen City lodge, at Centralia, Illinois; also the Benevolent and Protective Order of Elks and the Woodmen. The family attends the Baptist church.

Mr. Miller started in life under none too favorable environment, but being ambitious and a man of industry, rare common sense and foresight, he has always prospered and today is ranked among the progressive and substantial citizens of Marion county, Illinois. He learned much in the way of being a general business man from his father, who was one of the well known men of industry in his day, having conducted a saw and grist-mill which were run by waterpower with an old-style propeller saw. It was located on Mill creek, Union county. He also owned a large maple grove and made maple syrup and sugar.

Extracted 27 May 2019 by Norma Hass from 1909 Biographical and Reminiscent History of Richland, Clay and Marion Counties, Illinois, pages 581-583.