Cem. on Herman Poetker Farm located in NW corner of NE 1/2 of sec. 35 Sugar Creek Township (T 2N1 R5W)
Veteran Graves Joel Martin (stone broken in several places) and Jos. Maxwell located in cattle pasture.
In August of 1960 there was a terrible storm destroying the two trees in the small portion of the pasture that is the cemetery. One tree knocked the tombstone of Joel Martin down and it can no longer be found. Mr. Poetker walked over to the field and confirmed that Joel Martin's grave was where there is now only a stub of a five inch government tombstone and showed us a hole beside the fence where many tombstones had been used by the men cleaning up the storm damage to fill up the hole.

Children of Valentine Martin and Hannah McCullough are:

Isaac P. (Pruitt) Martin enlisted from Marion County, Ill, Aug. 14, 1862, and was mustard into the United States Service at Salem, Ill., Sept. 18, 1862, as a private of Co. "K", 111th Regt. Illinois Volunteer Infantry under Capt. Joseph Shultz and Col. James S. Martin to serve three years. He was in hospital at Martinville, Ala., about 15 days, suffering chills, was detailed with squad as dispatch-carrier from Huntsville, to Decatur, Ala., He was, HONORABLY DISCHARGED June 13, 1865, at Nashville, Tenn on account of the close of the war. The Regt was assigned to the 2nd Brigade 2nd Division, 15th Corps., Army of the Tennessee and participated in the following engagements: - Gravel Springs, Decatur, Ala., Snake Creek Gap, Cross Roads, Canys Gap, Resaca, Georgia, Bull's Gap, Jonesboro, Ft. McAllister, South Edisto River, S.C., North Edisto, Columbus, S.C., Cheraw, Bentonville, N.C. Also in the Grand Review at Washington D.C. May 24, 1865.

The following was found in the March 25, 1914 Centralia Evening Sentinel. It was a little write up under Walnut Hill news:

"Isaac Martin died at his home here (Walnut Hill) Tuesday, March 17, 1914, at the age of 88 years. He was born in Tennessee in 1826. He leaves a wife, two children and a number of other relatives and friends to morn his departure. The beraved ones have the sympathy of their friends." 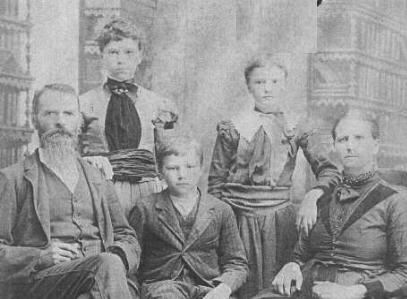 Children of Isaac Martin and Rebecca Weems are:

Children of Isaac Martin and Elizabeth Warren are:

Children of Cynthia Martin and James Burge are:

Children of Lottie Martin and Charles Sanders are:
My Grandma
Ruby Ann Sanders age 16. Taken in 1918

Bruce and Norma were married at The First Christian Church, 1955. The marriage ended thirteen years later in divorce. They had only one child.

Child of Norma Bundy and Clarence Phillips is:

Children of Cheryl Sanders and Chris Feldthouse are:

Children of Stephen Sanders and Veronica Lauff are:

Children of David Sanders and Diana Linboom are:

Children of Kim Phillips and Gregory Randolph are: