Marion county lies north of Jefferson, east of Clinton, south of Fayette, west of Clay and Wayne. It is generally level, though well drained by branches of the Kaskaskia in the west and north, and by Skillett Fork, a branch of the Little Wabash in the southeast. It lies therefore on the "divide" and in the "Grand Prairie" which the early settlers described.

The county was organized January 24, 1823. It is twenty-four miles square - four townships each way. It is mostly prairie lands with considerable timber along the larger streams. The soil is not of the best quality and much of the ground is not naturally well drained. Considerable areas have been tiled and where this has been done there is a marked improvement in returns to the farmer. Much attention has been given to apple orchards. The soil seems to be adapted to the growing of all kinds of fruit. The farmers have had to contend with the usual drawbacks, the various insects, the cold winters, and often the summer drouths, but in spite of these the apple crop is perhaps as remunerative as any other agricultural product. Strawberries, blackberries, raspberries and kindred crops do well, and are produced in large quantities.

Salem, the county seat, is a very old town. It was settled in 1623. It is situated a mile south and west of the center of the county. It is on the old trail from St. Louis to Vincennes and at the crossing of that trail and the old Kaskasia and Detroit trail. The St. Louis and Vincennes trail was made a mail route in 1805. Governor Reynolds tells in his "History of My Own Times" of transporting some money from Vincennes to St. Louis in 1815. He said he was acting for Paymaster Hempstead of Vincennes, and took the money to Paymaster Major Douglass in St. Louis. There were $15,000. Governor Reynolds says he had two trusty Frenchmen as guards. He says: "There was no settlement at that day between Vincennes and the Kaskaskia river." He passed by the site of Salem, on through Carlyle and to St. Louis.

The growth of Salem must have been slow, as in 1837 it is reported to have had only about thirty families. Walnut Hill, six miles southeast of Centralia, is an old settled neighborhood, and in the early days was probably a larger place than Salem, though most of the settlers were farmers.

In the general assembly which met in the winter of 1848-9 a policy was inaugurated known as the "State Policy," which looked to the building up of cities within our own state. There were applications for charters for railroads from the Indiana line to a point opposite St. Louis. These roads would, of course, benefit the territory through which they would run but would tend to build up St. Louis at the expense of Alton and other Illinois towns. The charters were refused and all Southern Illinois was up in arms in protest against this "State Policy.” To express the general dissatisfaction of the people in the south end of the state a monster meeting was planned to be held in Salem in June, 1849. To this meeting 1,000 delegates came and as many as four or five thousand other interested citizens. Governor Zadoc Casey presided and the principal address was made by William Smith Waite of Bond county. (Mr. Waite was the one who suggested the Illinois Central railroad, originally.) The meeting at Salem denounced the "State Policy" as being detrimental to the development of Southern Illinois. This meeting at Salem was so far reaching in its influence that the opposition felt the need of counteracting it and so called a meeting at Hillsboro, which was attended by as many as 10,000 people. The "State Policy" was eventually abandoned. 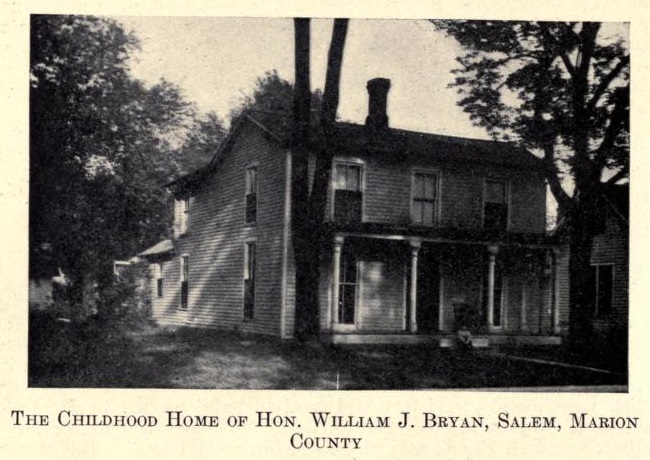 In the year 1851 there came to Salem a young lawyer, recently a graduate from McKendree, by the name of Silas Lillard Bryan. He was a Democrat, with office-holding proclivities. In 1852 he was elected to the general assembly and later to a circuit judgeship. He was an influential man in the councils of his party and a valuable citizen. On March 19, 1860, there was born to Judge and Mrs. Bryan a son, William, whom the world knows too well to need any words from the writer. The old Bryan homestead still stands in Salem and the desk is still pointed out at which William sat as he conned his lessons and dreamed dreams of future greatness and usefulness.

No sketch of Salem would be complete if it omitted to mention another distinguished patriot and citizen. This was Gen. James S. Martin, who with his parents came to Marion county in 1846. He served in the Mexican war and afterwards held civil positions. He was colonel of the 111th, and was breveted brigadier general at the close of the war. He was for a while United States pension agent and later a member of congress from his district. He was department commander of the Illinois G. A. R. for 1889-90. He recently died at his home in Salem.

No less distinguished a soldier and citizen was Maj. Gen. Wesley Merritt, whose father was prominent as a journalist in the 50's and 60's. Gen. Merritt graduated from West Point in 1860. He rose to the rank of major general. He was in command of the troops that occupied the Philippines and acted as military governor for a time.

THE PRESENT SALEM AND CENTRALIA

The city of Salem is indeed a beautiful city. Years ago, when other towns were asleep and their patrons from the rural districts were dragging through their muddy streets, Salem was paving her streets. It has two main lines of railroad, the M. & O. Southwestern and the C. & E. I. In addition there is the Illinois Southern, which connects Chester and St. Elmo. The city has beautiful churches, handsome residences, and prosperous business concerns. It has an abundance of shade, which makes the city a delight in summer.

Centralia, the largest city in Marion county, has a population of 9,680 people, 329 of whom live across the line in Clinton county. This city came into being as the result of the building of the Illinois Central railroad. There were two rival sites for the location of the future city. The railroad first planned to put its shops, etc., near Crooked Creek, the present site of Central City, but because the land speculators were too greedy, it is said the company moved south to the present Centralia. This was in 1853. During this year Centralia was laid off by Jones, Gregory & Hickney. Lots were bought and interest was so keen that additions to the original plat were made. Thomas Green built the first house in Centralia. It was a log house and was a sort of hotel or boarding house to accommodate the men who were working on the railroad.

In recent years several railroads have centered in Centralia and her transportation facilities are unsurpassed in Southern Illinois. Among these roads are the Illinois Central, Illinois Southern, Louisville, Evansville & St. Louis, and Jacksonville, Litchfield & St. Louis.

Centralia has a number of shops, factories, mines, etc., where the laboring people can secure work at all times. Probably the greatest source of wealth to the community is to be found in the coal mines. There were seven mines reported in 1911 for the county. Four of these are in Centralia, one at Odin, two at Sandoval. These seven mines put out 1,134,377 tons in 1910.

There are also several small but prosperous towns in this county, among which are Kinmundy, Odin, Vernon, Patoka, Sandoval, Iuka, and several country stores and postoffices combined.

The latest matters of interest in this county is the discovery of oil. A recent report says: "The Sandoval field of Marion county in 1911 was clearly defined and found limited to about three-fourths of a square mile. There are 66 producing wells that have a daily yield of 1,800 barrels.”