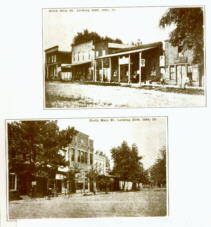 The first land sales in Marion county show, 1820, that Joseph Piles, paid $80 for a parcel of land, which is in elation to present township of Iuka, Marion co was taken from the northern part of Jefferson co in January, 1823. Frederickstown 1840-1843. A stagecoach stop on the St. Louis Vicennes trail. The town was laid off by Elisha Wadlow and ther first house built by James Fisher. John Lawson was first postmaster in first post office in Iuka Township. The town grew and F. D. Newell opened the first store. It was a rough and lawless town of about a hundred residents. The Ohio and Mississippi railroad came throught the township and Fredrick town began to dissolve, many of buildings were moved to Xenia; to Middletown; and small settlement called Stringtown. John Middleton was granted sections 17, 18 and 19 in Iuka township in 1838. In 1853, he deeded section 17 to son David and section 18 to son Alfred. In 1856, they plotted lots for the village, named it Middleton and post office was named New Middleton. In 1867, the town was incorporated and named Iuka. Names of Conner, Pyles, Middleton, and Jamison were among first to settle in Iuka. Soon others followed and built the community into a thriving town. ... Grocery and dry goods stores, blacksmith shops, saw mills and grist mills began and settlers began to stay instead of moving on west. The first church was Cumberland Presbyerian, deciated in 1864. First pastor was Harrison Eagen and cost was 1800 dollars. First school was log cabin in Stringtown taught by Cinithia Cooper, this was early 1841. Subscription schools were operated by Mary Finch and Nina Lear. First Justice of Peace was Solomon Smith; John Eddings was notary public and Dr. Joseph Irwin was one of first doctors. Brick buildings began to spring up; more churches were built. In 1881, limestone was discovered .... some of early names in business were .. Holstaw; Deaver; Daniels; Crundell; Moody; Quinn; Hinderer; Neff; Beaver and Jones. Doctors and lawyers came to practice in growing town with names as Middleton; Finn; Humble; Songer; Brooks; Johnson; Dyer; Hamilton. Lawyers were Schoolfield and Jackson. In 1881, a resort well known for its medicinal purposes water was very popular. John Phillips built a hotel and hundreds of people visted Tinkler Springs regularly, it was two and a half miles northeast of Iuka Newspaper came to town, the Messenger, it did not last long and a Mr Daniels began the Iuka Bee. Rose Lake become a well-known resort. Iuka became known as the greatest shipping point in the country for railroad ties. In 1909, there were 5 general stores, 2 hat shops, 3 restaruants, drug store, bakery, bank, lumber yard, butcher shop, 2 implement stores, 2 hotels and 4 churches. In 1924, there were 5 new radios in town, owners were, Holstlaw, Kelley, Hinderers, Mcguire, and Finn. In the 20s Albert Hawn opened a blacksmith shop and Mr. Perry and Bill Bauman were mayors. High school was formed, in the thirty, new telephone office was formed. In the forties, cars, trucks and tractors came into their own. the boys were off to war and the county was issued ration books for gas, tires, shoes and sugar. During the years, the businesses wouls come and go, with new ones coming and old ones leaving. One of the mayors, Vernice "Boone'' Silvey served from 1969-1985 (this was my uncle, my mom's brother) Boone also served as fire chief, he passed away in 1997. Although the town is small at this date, there is a lot of closeness and Community spirit in the town where I was born, daughter of Fred Frazier and Jessie Silvey. I have a sincere feeling to this town, and visit often. My grandparents Ora and Ed Silvey are gone, as my uncle Tobe Silvey, Boone Silvey, Nan Silvey, Norma Linder and my aunt Nina Jourdan no longer lives there, she resides at Doctors nursing home in Salem. I have Aunts Ruth Silvey, Milly Silvey and uncle John Linder. My dad is buried at Iuka cemetary as are most of my relatives. This is a very well kept and clean cemetary on edge of Iuka. My most happy years were spent in this wonderful little town that I am always proud to call HOME. 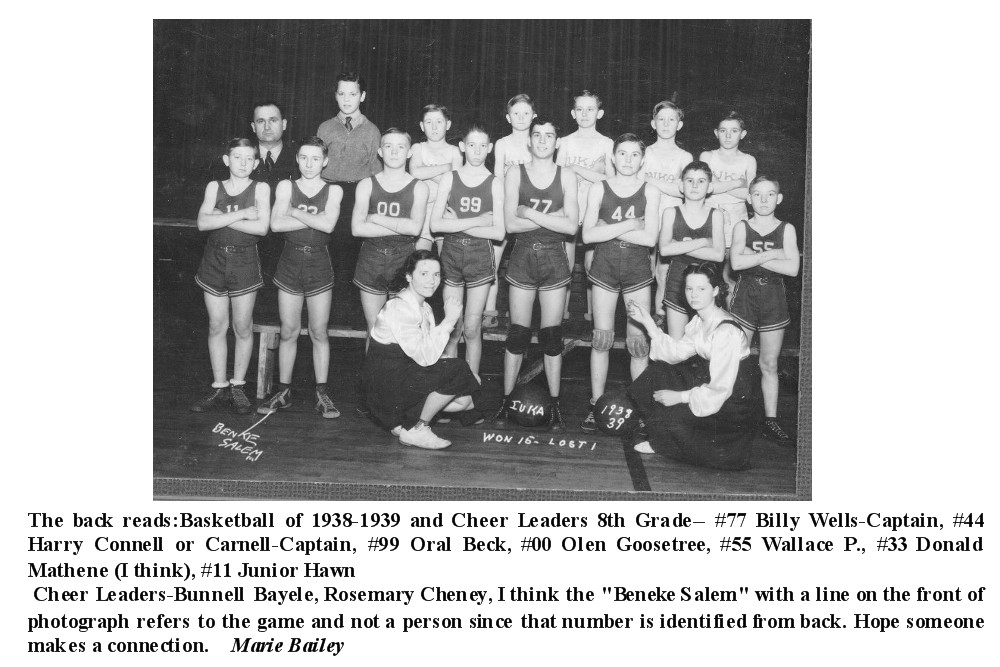