Centralia, Ill., March 26 (UP) - a poisonous blanket of carbon monoxide gas let loose by an explosion rolled through the tunnels of the Centralia Coal Company's mine today, threatening 114 entombed miners.

Centralia, Ill., March 26 (UP) - a poisonous blanket of carbon monoxide gas let loose by an explosion rolled through the tunnels of the Centralia Coal Company's mine today, threatening 114 entombed miners.

Mine officials and police feared all the men still in the mine were dead.

"I Remembered I Had Been Mean to a Dog Once When I Was a Kid"
By John Pick, Jr.
Survivor of Mine Explosion

I looked at my watch and saw it was pretty near quitting time. That was around 3:30 yesterday afternoon. We started up, laughing like we always do, and thinking of that fresh air we would be getting in a few minutes. We were about 500 feet underground when all of a sudden there was a rumbling explosion that rocked everything. I was knocked cold for a minute and when I came to, I could feel the earth still trembling. There was so much dirt and coal dust it was almost impossible to breathe. You could just feel old man death rolling through the tunnels and corridors. There was terrible confusion, enough to make a man crazy. I felt sick all over. I could smell death, too. It was that awful coal gas, the stuff we're scared of all day and have nightmares about all night. You smell it and then if there's enough of it around it just rolls over you like a blanket, and traps you in a hole and snuffs out your life.

It's true about your whole life unfolding before you when you think you're a goner. It's just like a movie. I remembered I had been mean to a dog once when I was a kid, and I remembered the first time I went to church.

I thought of dad right away, too (John Pick, Sr. 54), who had gone down into the shaft with me this morning lugging his lunch box and yelling, "So long, Jack. See you at quitting time." We separated right after that. So far as I know, he's still down there, fighting for a breath of air with the others. I called out for some of the men who had started up with me--Joe Bancil, Harry Greathouse, Eddie Dunn and a couple of others. I called them by name and they all answered. It seemed like an eternity before we got ourselves straightened out and finally made it up to the top (through an air shaft). I must have passed out again, because the next thing I remember a Red Cross nurse was washing my face with a wet cloth in the Community Center basement and there were a lot of people around. I asked about dad, but nobody had any news. 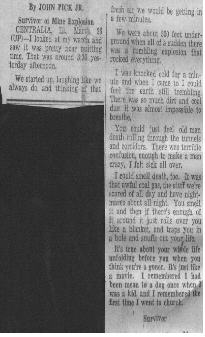 Nurses aide, Freda Smith, makes John E. Pick, Jr., comfortable on one of the cots set up in the basement of the Community Center in Centralia, Illinois, after the mine blast.

March 25, 1947 was a very dark day in the Centralia area. Around 3:30 pm a massive explosion claimed 111 lives in the No. 5 Mine. Only 31 escaped. One of the 31 was my Uncle, John (Jack) E. Pick. Uncle Jack was one of the first men rescued that dreadful day. The hospitals were so incapable and overcrowded that cots were put up in the Community Center. Many many families suffered loss. That day will never be forgotten to so many left behind who were there.....and to some who were not.

The information above was given to me by my Aunt, Betty Bundy Pick, the wife of John E. Pick, Jr. 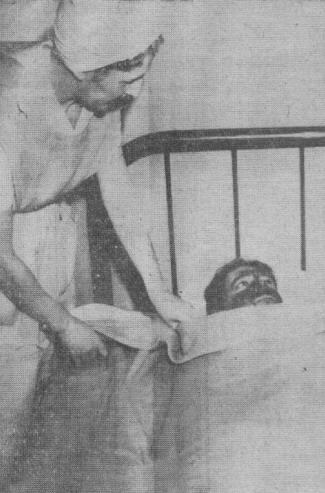 Letters from the trapped miners

The Dying Miner, one of three songs by Woody Guthrie published in the May, 1947 issue of People's Songs, memlorializing the 1947 mine disaster at Centralia, Illinois.

One man had scrawled: "It looks like the end for me. I love you honey more than life itself. You are the sweetest wife in the world. Goodbye, Honey and Dickey."

Another note was addressed to two boys: "Be good boys. Please your father. O Lord help me."

Some had been jotted down at intervals: "I am fine at 5:30____is in bad shape, going on and moaning. Tell ___I forgive her. Everyone going."

Another read: "My dear wife: Goodbye. Name the baby Joe so you will hae a Joe. Love, all. Dad." 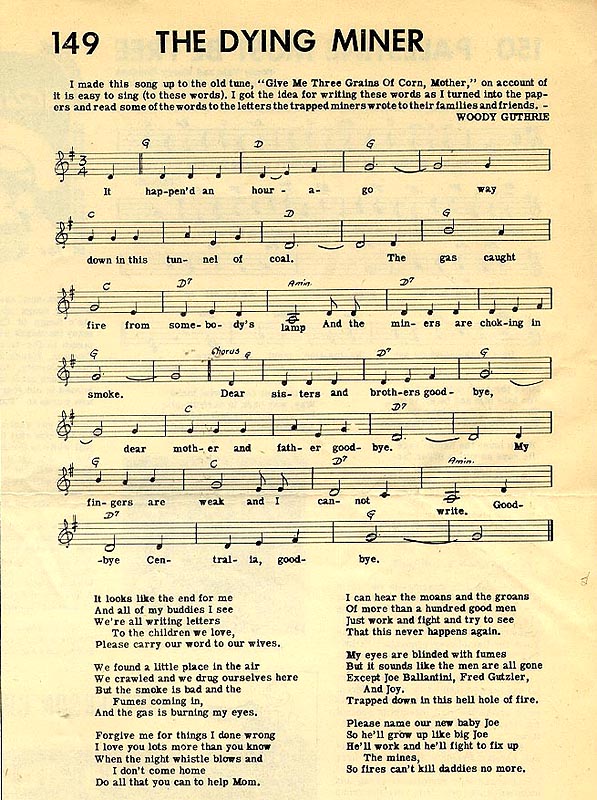