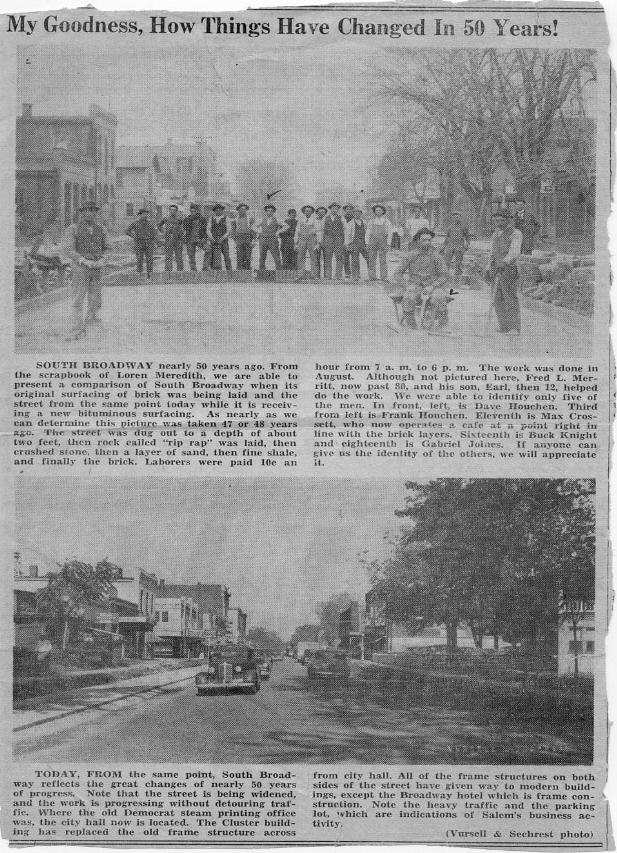 My Goodness, How Things Have Changed in 50 Years!

South Boadway nearly 50 years ago. From the scrapbook of Loren Meredith, we are able to present a comparison of South Broadway when its original surfacing of brick was being laid and the street from the same point today while it is receiving a new bituminous surfacing. As nearly as we can determine this picture was taken 47 or 48 years ago. The street was dug out to a depth of about two feet, then rock called “rip rap” was laid, then crushed stone, then a layer of sand, then fine shale, and finally the brick. Laborers were paid 10 cents an hour from 7 a. m. to 6 p. m. The work was done in August. Although no pictured here, Fred L. Merritt, now past 80, and his son, Earl, then 12, helped do the work. We were able to identify only five of the men. In front, left, is Dave Houchen. Third from left is Frank Houchen. Eleventh is Max Crossett, who now operates a café at a point right in line with the brick layers. Sixteenth is Buck Knight and eighteenth is Gabriel Joines. If anyone can give us the identity of the others, we will appreciate it.

Today, from the same point, South Broadway reflects the great changes of nearly 50 years of progress. Note that the street is being widened, and the work is progressing without detouring traffic. Where the old Democrat steam printing office was, the city hall now is located. The Cluster building has replaced the old frame structure across from city hall. All of the frame structures on both sides of the street have given way to modern buildings, except the Broadway hotel which is frame construction. Note the heavy traffic and the parking lot, which are indications of Salem’s business activity.

This newspaper clipping was stored for years by Karen Murphy's mom's great aunt. Buck Knight was Karen's great-grandfather. The top photo was taken more than 100 years ago. 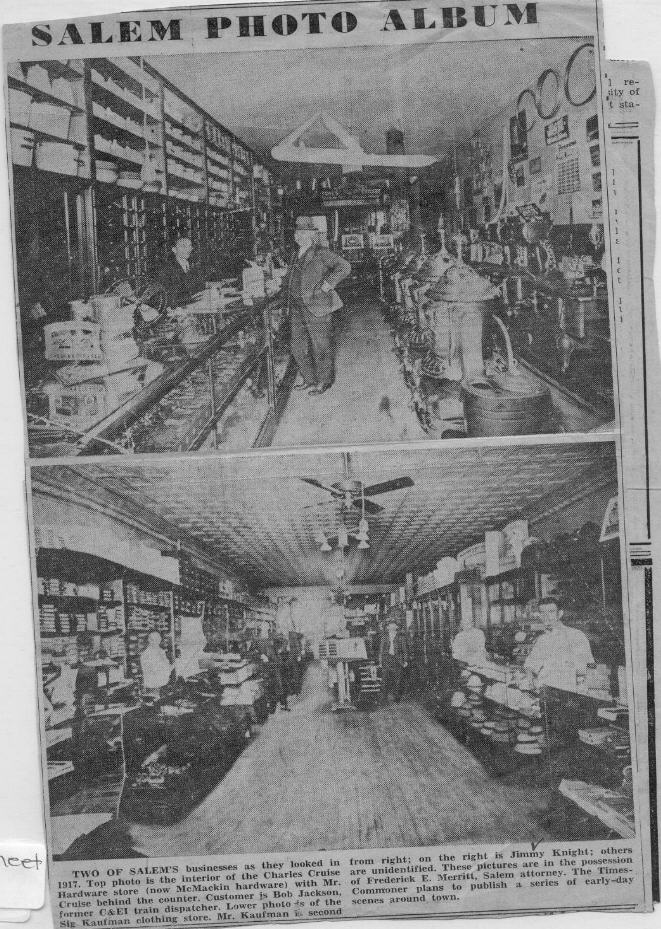 Two of Salem's businesses as they looked in 1917.

The top photo is the interior of the Charles Cruise Hardware store (now McMackin hardware) with Mr. Cruise behind the counter. The customer pictured is Bob Jackson, former C & CI train dispatcher.

The lower photo is of the Sig Kaufman clothing store. Mr. Kaufman is second from right; on the right is Jimmy Knight; others are unidentified.

These pictures are in the possession of Frederick E. Merritt, Salem attorney. The Times-Commoner plans to publish a series of early-day scenes around town. 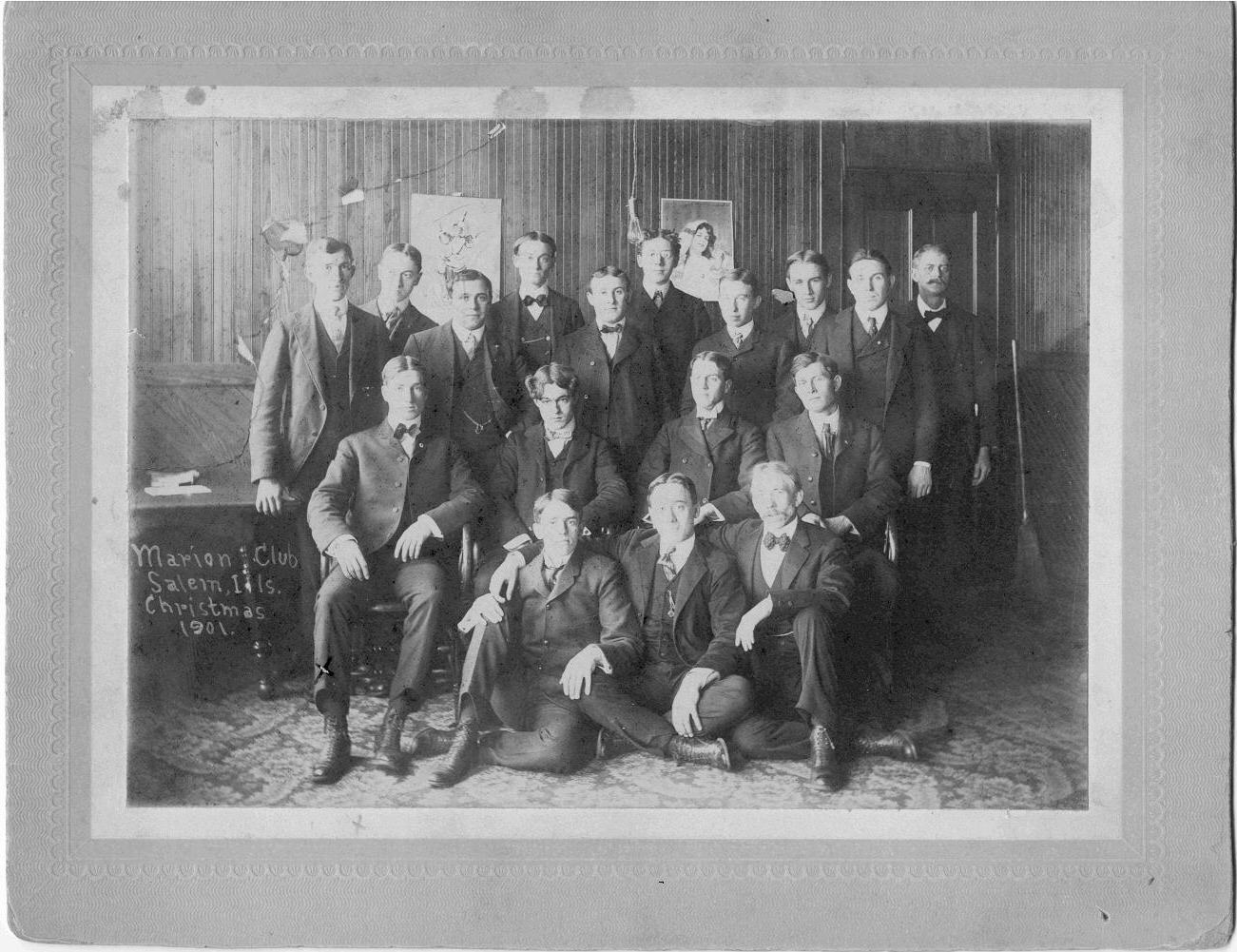 On the left, seated in the chair, with an “x” at the bottom of his pants’ leg is Clarence Simpson Knight, born 25 Oct 1882 in Marion County, Illinois. His father was James Buchanan "Buck" Knight. His mother was Cornelia Ella Dunn. He married 03 Oct 1912. He died 23 Aug 1919 in Villa Grove, Douglas County, Illinois. He was buried 24 Aug 1919 in East Lawn Cemetery, Salem, Illinois. He was the "half-grand-uncle" of Karen Murphy.