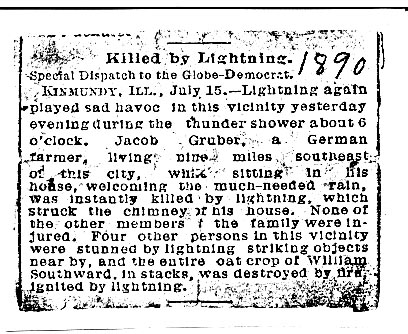 Kinmuncy, Ill., July 15 [1890]. - Lightning again played sad havoc in this vicinity yesterday evening during the thunder shower about 6 o'clock. Jacob Gruber, a German farmer, living nine miles southeast of this city, while sitting in his house, welcoming the much-needed rain, was instantly killed by lightning, which struck the chimney of his house. None of the other members of the family were injured. Four other persons in this vicinity were stunned by lightning striking objects near by, and the entire oat crop of William Southward, in stacks, was destroyed by fire ignited by lightning.